Looking for a school for your kids? Dhaka has quite a few international schools and a large number of local schools where the medium of instruction is English. A vast majority of the schools follow the British GCSE curriculum but you’ll find a few that also cater to the IB, American and even Australian curriculum.

Here’s an unranked list of some of the schools for now.

The Aga Khan Education Services (AKES) has a long tradition of leadership in educational development. The foundations of the present system were laid by Sir Sultan Mahomed Shah, Aga Khan III, under whose guidance over 200 schools were established during the first half of the 20th century, the first of them in 1905 in Zanzibar, Gwadur in Pakistan and Mundra in India.

The American International School/Dhaka (AIS/D) is an independent, coeducational day school which offers an educational program from pre-kindergarten through grade 12 for students of all nationalities.

AusIS is the first overseas school to be affiliated with the prestigious Association of Independent School of Western Australia (AISWA) and is currently working toward full endorsement with AISWA.

Bangladesh International Tutorial was opened in August 1983, by the Founder-Principal Ms. Lubna Choudhury. All subjects will be taught in accordance to the IGCSE syllabi. English is the medium of instruction.

CGS an associate member of the Round Square organization of International schools.

With time, we took one step after another, and today, we can claim being one of the best English Medium schools in Dhaka, and in Bangladesh.

The only school providing a bilingual curriculum in French/English from 2 years old.

High-quality child-centered primary education based on a British curriculum in a Christian environment for expatriate children in Bangladesh. 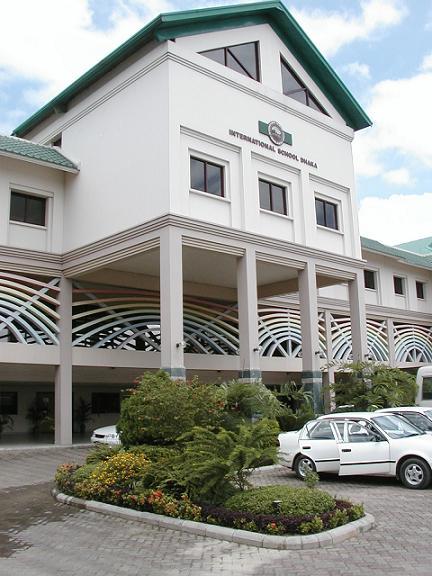 ISD is an international and co-educational day school, founded in 1999, that was built to accommodate students from Playgroup to Grade 12. The school provides a high-quality international education for both the local and the international community. We are determined to maintain a high quality of teaching and learning, as well as set the highest standards in everything we do.

I.T.H.S. tries its best to introduce modern methods and techniques in teaching and education according to international standards. It also tries to build a bridge between Bangladeshi and Turkish educational community.

Manarat International University (MIU) is one of the leading educational institutions established in 2001 with a vision to impart high quality education of international standards and a mission to develop dynamic leadership in the society with moral excellence.

Oxford International School (OIS) is an English medium co-education School following the academic programme of the University of Cambridge, UK up to GCE O and A Level.

Saint Francis Xavier’s Greenherald International School, Dhaka 1207, is an extension of the St. Francis Xavier’s Luxmibazar English medium, Dhaka-1000, which was closed during the Liberation of Bangladesh in 1971. This school was reopened at Mohammedpur, in 1972, by the Order of the Education Ministry for the children of foreign nationals only. Later, Bangladeshi children were allowed to study in this school. The school has its affiliation with the Cambridge University U.K. since 1954. It is owned and run by the Sisters of the Congregation of Our Lady of the Missions, a Roman Catholic Order, originating in France, whose main apostolate is the education of children.

The purpose of the school is not only to prepare students for academic excellence but it is also to give the formation to the whole person through an integrated Curriculum based on the principles of education. It to prepare students personally for future leadership roles both nationally and globally.

Scholastica was established in 1977 by Mrs. Yasmeen Murshed. It was founded with a mission to provide a balanced and well-rounded education for all our students, using English as the primary medium of instruction but placing equal emphasis on Bangla.

Scholastica’s mission is to build curious, knowledgeable and caring young individuals, who will be equipped to tackle head-on the challenges of our modern-day “global village”. They will aspire to become responsible citizens, who will embrace and respect people from other cultures and walks of life.

Singapore School (SS) is a co-educational, international school in Dhaka, Bangladesh. SS provides a Singapore-style education to the expatriate and local community in Dhaka. The school has two campus situated in Gulshan and Uttara of Dhaka. In total, the school has students representing over fifteen nationalities. Teaching staff are mainly local and trained by Teacher Consultants from Singapore.

Scroll to Top
Skip to toolbar